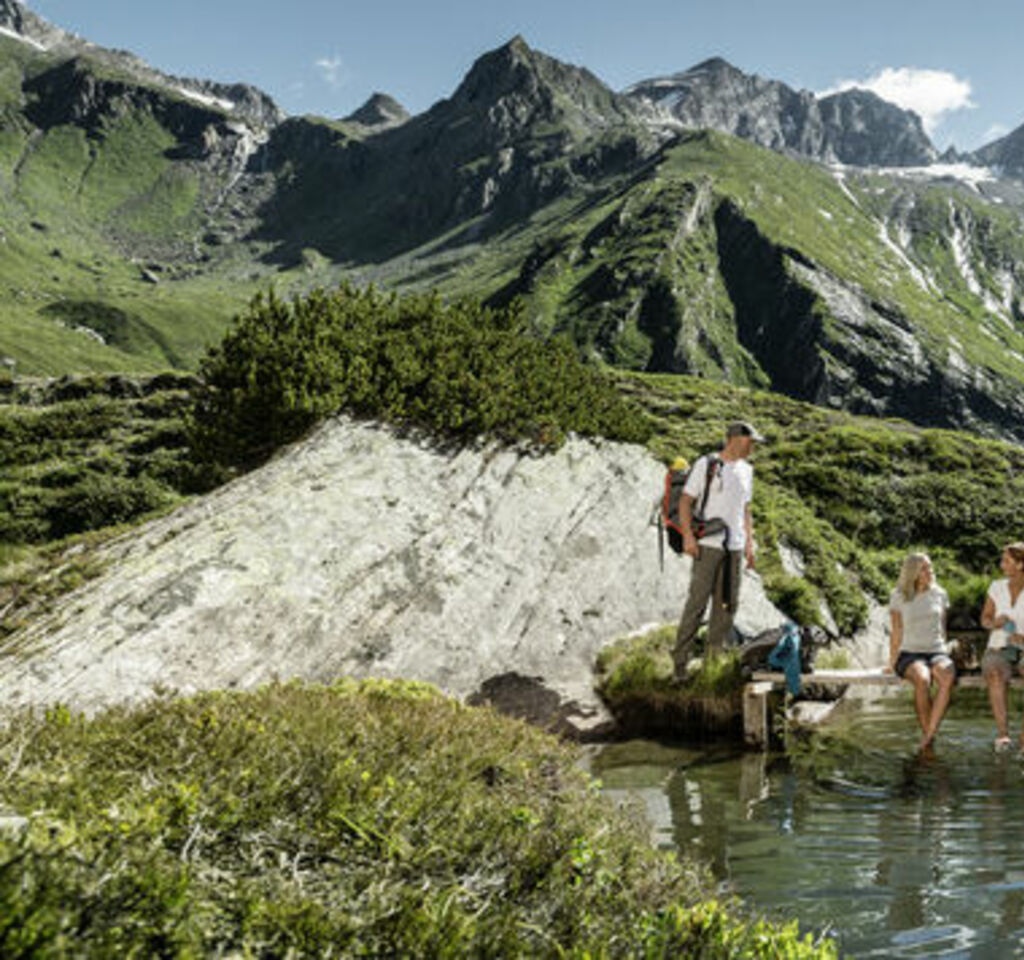 Summer in Tirol – a memorable affair

It’s impossible not to fall for Tirol in the summertime – in fact, it’s a serious challenge to the long-standing winter love-affair that British holiday makers have had with Austria’s western province situated at the heart of the European Alps and a ski destination hailed the world over.

But, there’s most certainly another season very much in this alpine picture, bringing with it a mountain landscape, now unveiled under the summer sun, which can be explored at a slower, more purposeful place but with the same exhilaration and excitement that its winter counterpart induces.  Grab your gear and simply go – whether on wheel, by foot, or diving in with a splash – there are no limits to enjoying Tirol’s natural adventure playground. What makes it all so special is its Tirolean imprint – there’s a real sense of tradition here and you’ll feel it in its warm hospitality, a deep rooted appreciation of nature, and a passion for adventure that characterise the Tirol. Once you’ve arrived you’ll know it, and when you leave you won’t soon forget it.

For many British visitors, Tirol’s attractive capital city of Innsbruck, with direct flights to several UK gateways, is the starting point of their summertime adventures in the province. In 2019, this former imperial city marks ‘the year of Maximilian’ - 500 years since the death of this Hapsburg Emperor who made Innsbruck the centre of his empire.  Its medieval Old Town remains home to some 130 buildings constructed during the times of Maximilian, while incorporating the more recent additions of cosy street cafes, restaurants, boutiques and crafts shops. An attractive location hugged by a rugged mountainscape and nestled alongside its namesake, the Inn River, Innsbruck offers the ideal holiday ‘double act’ with urban exploration rich in history just minutes away from the most modern of mountain infrastructure whisking visitors up to its Nordkette range where awesome views and plentiful recreation await. Well-deserving of its ‘Jewel of the Alps nickname, Innsbruck is a cool, alpine-infused city with a king-sized mountain world on its urban doorstep.

Tirol’s crowning glory as always been its great outdoors, its limitless potential when it comes to recreational choices. Being active is almost a mantra of sorts and St. Anton am Arlberg steadfastly follows suit with its sporty disposition. Often credited as the ‘cradle of alpine skiing’, this resort region is a real draw for mountain bikers with 350km of marked trails, but also for road cycling with several high profile races including the Arlberg GIRO (4 Aug) covering 150km and an ascent of 2500m in altitude, and the Arlberg bike marathon (1 Aug), the final leg of a unique summer mountain triathlon. To round out the offers on two wheels, the 2nd annual e-bike festival (21 – 23 June) makes its return after its successful inauguration last year. 300km of trailways greet hikers and the region is also a paradise for climbers with an internationally-recognised network of via ferrates. Closing out the season is the mountain yoga festival (5 – 8

Sept) which combines yoga and nature for the ideal refresher for body and mind. In the evening, return to one of the region’s resort villages, charming in their traditional alpine character – in fact, don’t be surprised to hear the sounds of brass music as you come back to your home away from home.

A high-tech interactive James Bond installation/museum set at 3000m atop the mountain featured in 2015’s Spectre might be just the hint that action and adventure is ripe in this part of the Tirol known as the Ötztal. Ten summer lifts lead to 1600km of marked hiking trails, among them the much heralded Ötztal trek, a long-distance route spanning 400km. At Bike Republic Sölden, mountain biking is a full time pastime, ingrained in the culture of Ötztal’s age-old mountain landscape, with trails carved out following sustainable practices to preserve this natural playground. This unique mountain bike destination covers a huge natural area filled with single trails, flow trails, trick riding, uphill challenges, and even Tirol’s biggest pump track right in the village centre at the base of the lifts. 30 mountain restaurants and huts also ensure riders get their culinary fill. But fresh air fun in the Ötztal isn’t only limited ‘on land’. Hardly. Check out the amazing Area 47, a 20,000sqm water sport and adventure area which reads like a list of all things in the adrenaline inducing ‘just add water’ category.  Just some of the fun includes: waterslides, over water bouldering, cliff diving, rafting, canyoning, wakeboarding, water cannon, and surf sliding (plus, you’ll just have to find out what ‘blobbing’ is when you get here…) The secret’s out at this Bond hideaway -  a summer holiday in the Ötztal stirs the imagination!

Often it may seem that there are too few hours in the day to fit in all the fun of a Tirolean summer. One solution – make sure you celebrate the longest day (and shortest night) of the summer in memorable fashion. In the Tiroler Zugspitz Arena, one of the most important days of the year is the tradition of its ‘mountain fires’, an ancient alpine custom in which controlled fires up to 200m in height burn in the shape of symbols or pictures high up on the mountains to mark the summer solstice in truly a sight to be seen (22 June 2019). Views of Germany’s highest peak – the Zugspitze – dominate this region of dramatic peaks and high altitude pleasures. For mountain bikers the talk turns to the ‘Blindsee trail’, a true highlight for seasoned riders and ending lakeside which can only mean a refreshing dip is in order. Post-ride, Austria’s highest brewery with its three local brews is certainly worth a toast. Plenty of family offerings here as well with kids trails that make this mountain world accessible for all ages. A useful tip is the Z-Ticket, a guest card given free of charge by accommodation providers offering complimentary access to cable cars, summer hiking buses, guided programmes, children’s activities, sports facilities and other local attractions.

Sure, winter may be a memory, but does that have to mean that the ski season is over? Not in the Zillertal, with summer skiing possible high on its Hintertux Glacier and making it Austria’s only year-round ski resort.  In fact, the Zillertal is home to over 80 glaciers and a mountain world offering 1400km of diverse hiking opportunities and 1200km of mountain bike trails all served by a network of ten summer cable cars, eight of which have the capacity to transport bikes. Overnight bike-and-hike adventures offer the best of both worlds and give you the chance to spend a night in one of the 150 managed huts in this hospitable region. In 2019, an hourly bus service will run on the Zillertal High Alpine Road stopping at four stops in the valley en route to three scenic lookout points; the highest point on this 50km long high altitude road is 2020m. Amazing vantage points can be found throughout the Zillertal, one of the most unique being from the 2000m Schlegeis Dam featuring a thrilling abseiling station, a specially designed via ferrata, a kids climbing course, a 600m Flying Fox which races along the wall of the dam, and a giant swing with a 30m free fall if you dare. No surprise that the Zillertal Alps are a part of the High Alps Nature Park, established in 2001 to preserve the natural environment from altitudes of 1000m upwards.

Stretching 24km through Tirol’s scenically blessed Kitzbühel Alps is the high valley of Wildschönau. Here, unspoiled nature and alpine traditions create a summertime escape that’s quiet, not crowded.  Four quaint villages, each with its own distinctive church, reflect the rural culture of this area which has long been associated with agriculture and culinary treats. There are 260 working farms in the region, with local dairies well-known for their cheese products. Taste a bit of schnapps along the way as well as this is the only region in Austria allowed to distill the traditional Krautinger schnapps made from white beets. Time to get moving after all this sampling, and there’s little excuse not to with 300km of hiking routes and 250km of bike trails (including for e-bikes) at the doorstep. Even the littlest guests are catered to in Wildschönau with plenty of family hiking, a kids’ bike park, and the weekly ‘Dragon Kids Club’ with activities from gold panning to treasure hunts. A guided sunrise hike tops off an incredible holiday in ‘wild’ and ‘beautiful’ Wildschönau.

For a host of summer sights and diversions, look no further than charming Alpbachtal, an all-season recreational valley dotted by over 450 farmhouses with its 1000m village of Alpbach named ‘Austria’s most beautiful village’. Hiking is limitless in distance and variety with 900km of marked trails including Tirol’s famed ‘Eagle Walk’, a long distance route stretching some 256km over the length of the province. Multi-day hikes are also popular, as are on foot explorations of a trio of impressive gorges - a unique geological feature of this area. 250km of mountain bike routes, e-bike infrastructure with guided tours, and a host of lakes reputed to have the warmest waters in the Tirol mean summer fun on land and water. Don’t miss a taking a step back in time with a stroll around Rattenberg, Austria’s smallest town, set at the foot of a medieval castle and a gorgeously preserved example of the architecture of the time. Its 3-day annual medieval festival (26-28 April) celebrates the town’s history and lore.

Make this summer a memorable one and let your summer love affair with the Tirol begin.