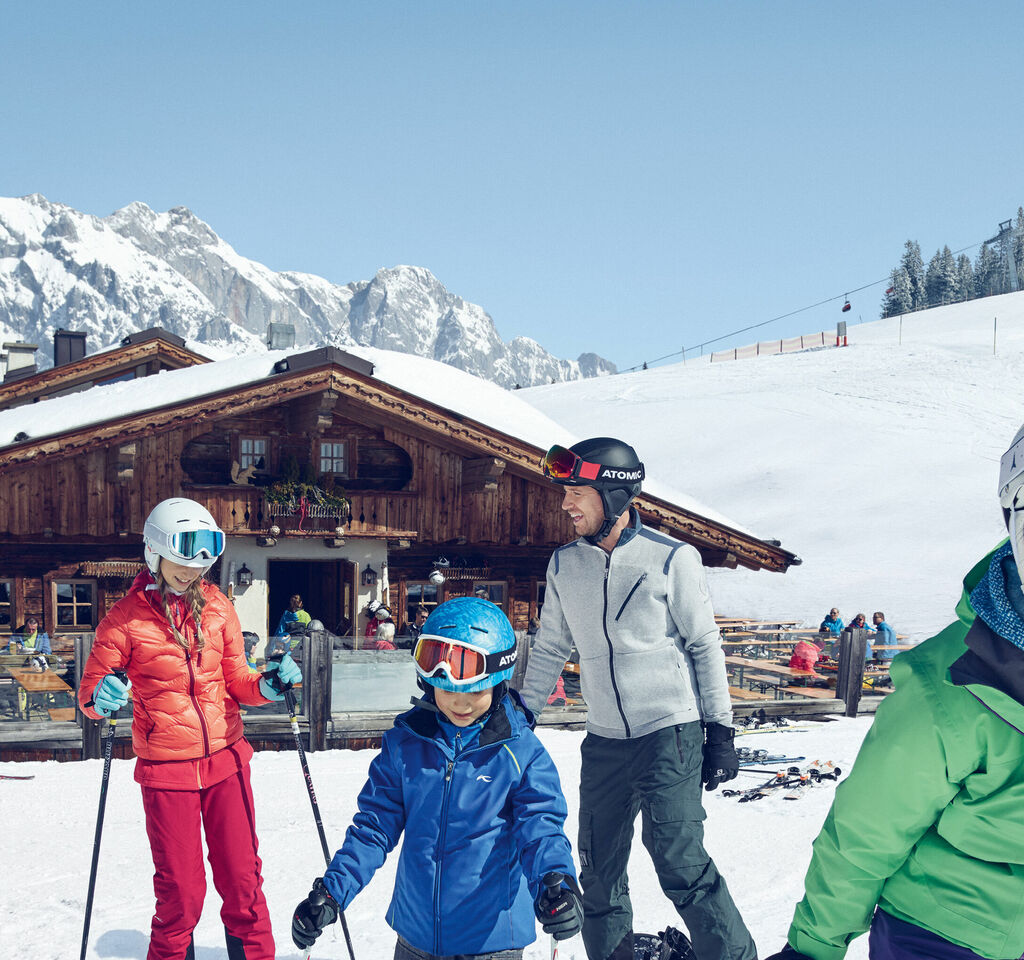 Austria is home to many of the most snow-sure resorts in the Alps. The skiing is sensational, and authentic villages with legendary hospitality provide a base for your stay. Austria’s sophisticated ski infrastructure receives significant investment each year, with higher, faster, bigger lifts and extended ski areas continuously upgrading the choice for winter guests.

Last season saw a 1.5% increase in overnights and a 3.2% increase in arrivals from the UK – our best winter result ever, proving that ski holidays in Austria remain a firm favourite with the Brits. Here are some of the resorts that everyone will be talking about in Winter 2017/18.

The medieval lakeside town of Zell am See is easily reached from Salzburg Airport. It shares the same lift pass as the equally picturesque village of Kaprun, about 8km down the road. You can take a combination of gondola and chair lifts from Zell am See town centre and the satellite of Schuttdorf for intermediate skiing on the Schmittenhöhe mountain, and snow-sure skiing is guaranteed on Kaprun's Kitzsteinhorn Glacier. Beginners or those returning to the sport can hit the wide range of nursery slopes or polish up their skills at one of the area’s 16 ski schools. Away from the slopes, chic shops line Zell am See’s cobblestoned high street and you can treat yourself to some down time at the impressive 20,000m² SPA Water and Sauna World just outside Kaprun.

Why this winter?
Refurbishment of Zell am See’s Areitbahn ropeway has begun, which will bring skiers to the Schmittenhöhe even faster thanks to a 50% increase in passenger capacity. With added legroom and seat comfort, ground level boarding plus free WiFi, you are in for a smooth ride. The perfect opportunity to test the new areitXpress is the Schmittenhöhe’s opening weekend, from the 8th – 10th December 2017. And with British Airways doubling the number of flights to four per week from London Heathrow to Salzburg, getting to Zell am See-Kaprun is easier than ever.

The conditions for a winter holiday in Austria’s southernmost province are ideal: a varied mountain landscape offering spectacular views interspersed with idyllic lakes, and a mild winter climate with an especially high number of sunny days. Carinthia has more than 800km of pistes in over 30 areas, covered by inclusive lift passes. Whether you are a beginner, returner or expert skier, you’ll certainly get your money’s worth here.

One of Austria’s largest linked ski areas since Fieberbrunn was hooked up in 2015 (both on the map and in writing!), the Skicircus Saalbach Hinterglemm Leogang Fieberbrunn offers fun and adrenalin for all. Otherwise known as the “Home of Lässig”, it is composed of four ski areas stretching from Tirol to SalzburgerLand. The individual areas are as diverse, varied and prestigious as one another, bringing all 270km of slopes together as the coolest ski area in Europe.

Why this winter?
Ready to “Ski your limit”? The Challenge is one of the toughest ski circuits in the Alps. 32 lifts, 69km of pistes, 12,000m vertical descent and seven hours to round it, with the well-deserved Challenge badge awaiting you upon successful completion.

Tirol and its Partner Regions

UK guests will be spoilt for choice when travelling to the Austrian Tirol this winter, as British Airways increases its flights to Innsbruck and Salzburg. Home to over 80 ski areas and a skiable terrain of around 3,000km, Tirol offers some of the most epic trails and thrilling rides to be found.

Take the Ski Juwel Alpbachtal Wildschönau, which has added an eight-seater gondola lift from Auffach to Schatzberg and introduced an Alpine Coaster in Alpbach, next to the Wiedersbergerhornbahn top station. From December 2017, the new gondola will transport more than 2,500 people per hour, and the Alpbachtaler Lauser-Sauser rollercoaster will treat thrill seekers to a one kilometre track towards the Kohlgruben lift from September 2017, remaining open year-round.

Ischgl has invested in its lift system for decades and has reached the point where fast, high-capacity lifts are being replaced by versions with even greater hourly capacity such as the new PALINKOPF D1, set to transport 2,800 people per hour from Winter 2017/18. Talking about substantial figures, the SkiWelt Wilder Kaiser-Brixental has invested €4.5 million in the up-coming season, adding 300 heated ski storage units at the bottom lift station, expanding and improving the snowmaking facilities across the resort, and introducing seven new piste bashers to ensure even smoother slopes.

Why this winter?
Tirol’s mountain action is so impressive that even James Bond is returning this winter! A unique cinematic installation will be opening at the top of the Gaislachkogl Mountain next to the ICE Q Restaurant Sölden in the Ötztal. The iconic location was used in the 007 movie SPECTRE as the Hoffler Klinik, and formed part of the snow chase sequence in the film.

The Spieljoch in Zillertal has changed ownership and now belongs to the Schultz group. The new 10-seater Spieljoch cable car takes you straight to Zillertal’s longest snow-covered valley run. As well as beautiful pistes for all skill levels, you‘ll find a new family fun slope and a cool snow park for daredevils. This winter mountain experience is completed by a 5.5km-long natural toboggan run that leads to the middle station, and a wonderful winter hiking trail to the Spieljoch summit.

Why this winter?
Currently, a complimentary ski bus connects the Spieljoch with the neighbouring Hochzillertal domain. From Winter 2018/19, a new 3-S-ropeway will link the two areas, a breakthrough innovation in Europe as peak-to-peak transportation of such extent only exists in Canada to date. Get writing about it before everyone else does!

Vorarlberg is a ski destination with a long tradition. More than 100 years ago, the first ever ski course was held on the Arlberg. Ever since, this alpine region has been cultivating the art of skiing, and the art of hospitality even longer. But that does not mean that the region does not move with the times, as last season’s major Flexenbahn opening proved. This winter, the new Dorfbahn cable car whisks skiers directly up to the slopes from Warth in Bregenzerwald’s village square. Further investments have been made in enhancing snow-making facilities.

Austria’s westernmost province and one of the most attractive regions in the Alps. Each of its resorts between Lake Constance and the Arlberg comes with an appealing, high-quality offer for visitors who want to experience winter’s true glory, be it the world-famous Lech Zürs am Arlberg or the undiscovered gems around Bregenzerwald.

Why this winter?
Whisper it quietly but the ski areas of Bregenzerwald have some of the best snow records in the Alps. Pssst, just tell them you are going for the cheese!