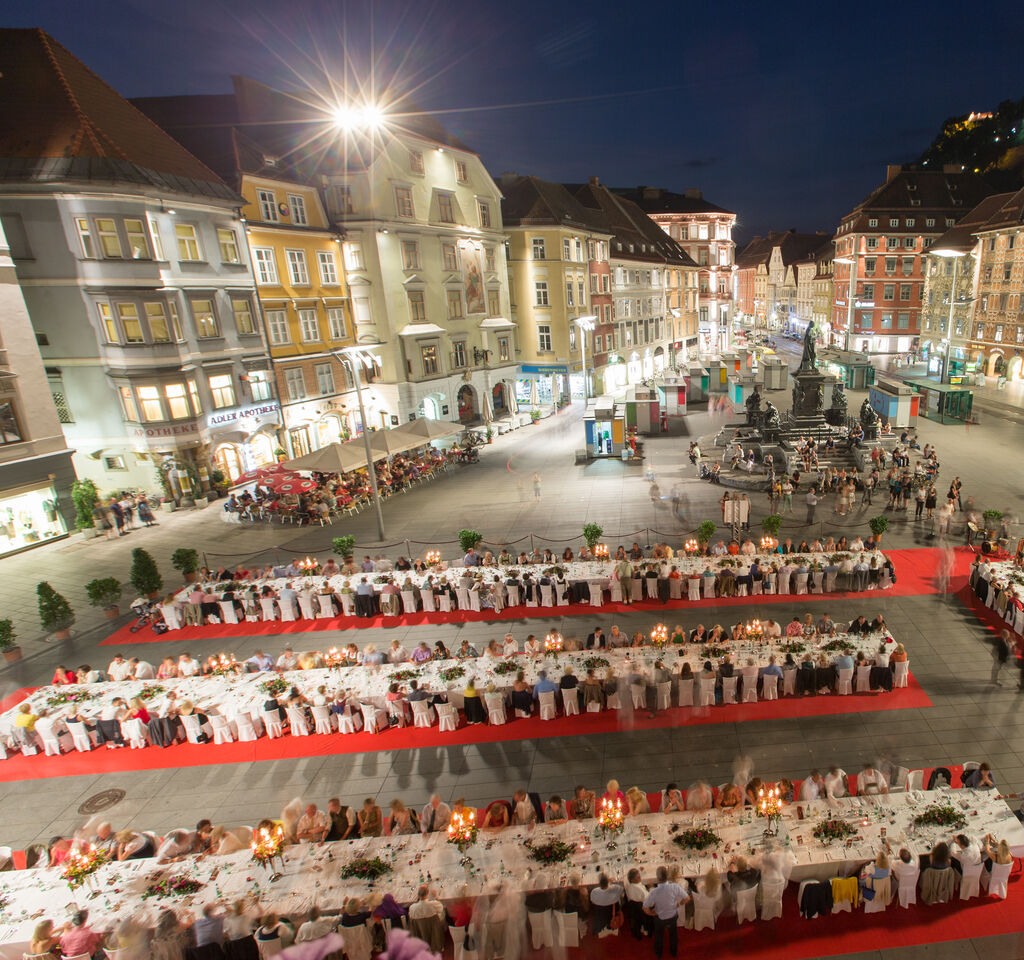 There’s a reason for those blissfully long summer days – there’s so much you don’t want to miss! Destination Austria invites you to browse its summer calendar which is always filled with the perfect pairing of new openings and events alongside familiar favourites that beg a return. Below, just some of the highlights of what’s in store this summer…

‘The Long Table of Graz’ is a highlight event on this city’s culinary events calendar. Each year, the Styrian capital transforms its historic Old Town centre into a giant al fresco restaurant with long tables set for some 700 guests who’ll enjoy a five-course dinner prepared by 27 chefs along with wine and musical entertainment. Although this year’s event on 20 August 2016 is already sold out, be the first to get tickets for the 2017 event – tickets go on sale 15 November 2016.

Get a glimpse of Tirol’s tradition of award-winning schnapps production at a schnapps-tasting experience in Innsbruck. In German and English, your host at the local Hoferbauer distillery, Mr Anton Nagiller, will explain how schnapps is produced, which regional ingredients are used and what flavours you can smell and taste. Apple-hay, rose, and pear are just some of the flavours to challenge the palate! A Tirolean dinner is also included in this 1.5 – 2-hour experience.

In 2016 the spotlight will fall on a number of imperial personalities and institutions. Vienna’s renowned art history museum, the Kunsthistorisches Museum Wien celebrates its 125th birthday in 2016. One of the landmarks lining Emperor Franz Joseph’s prestige project, the Ringstrasse boulevard, the museum opened in 1891 as the central repository for the Habsburgs’ art collections. The Lower Belvedere, part of Vienna’s baroque palace museum housing Austrian art, celebrates its 300th anniversary. And Vienna’s Prater park was opened to the public by Emperor Joseph II some 250 years ago. Spreading across around six square kilometers of the city, the former imperial hunting grounds are now Vienna’s largest leisure and recreation area. The Wien Museum Karlsplatz is dedicating a special exhibition (10 March – 21 August 2016) entitled ‘Meet me in the Prater. Viennese Pleasures since 1766’ to this milestone. www.wienmuseum.at

Vienna is now conveniently accessible from the Scottish capital with easyJet launching its direct Edinburgh-Vienna route 6 February, 2016 with fares from £30.24 each way.

For a pretty cool experience 1000 feet up in the air, board a modern Zeppelin at a hangar in Friedrichshafen for gorgeous views of Lake Constance and an unforgettable flight on one of these eye-catching airships. Simply choose the route and duration that takes your fancy. Fascinating shipyard tours are also available.

An extreme challenge for running enthusiasts, the ‘Grossglockner Ultra Trail’ is a unique trail running competition through high alpine terrain, going around Austria’s highest mountain, the 3498m high Grossglockner, and crossing the Alps twice, passing 14 glaciers and surrounded by some 300 summits. The competition starts at midnight on 22 July (and ends on 24 July) in Kaprun. New in 2016 - participants can enter as a relay in teams of two. Registration is open online until 20 July 2016.