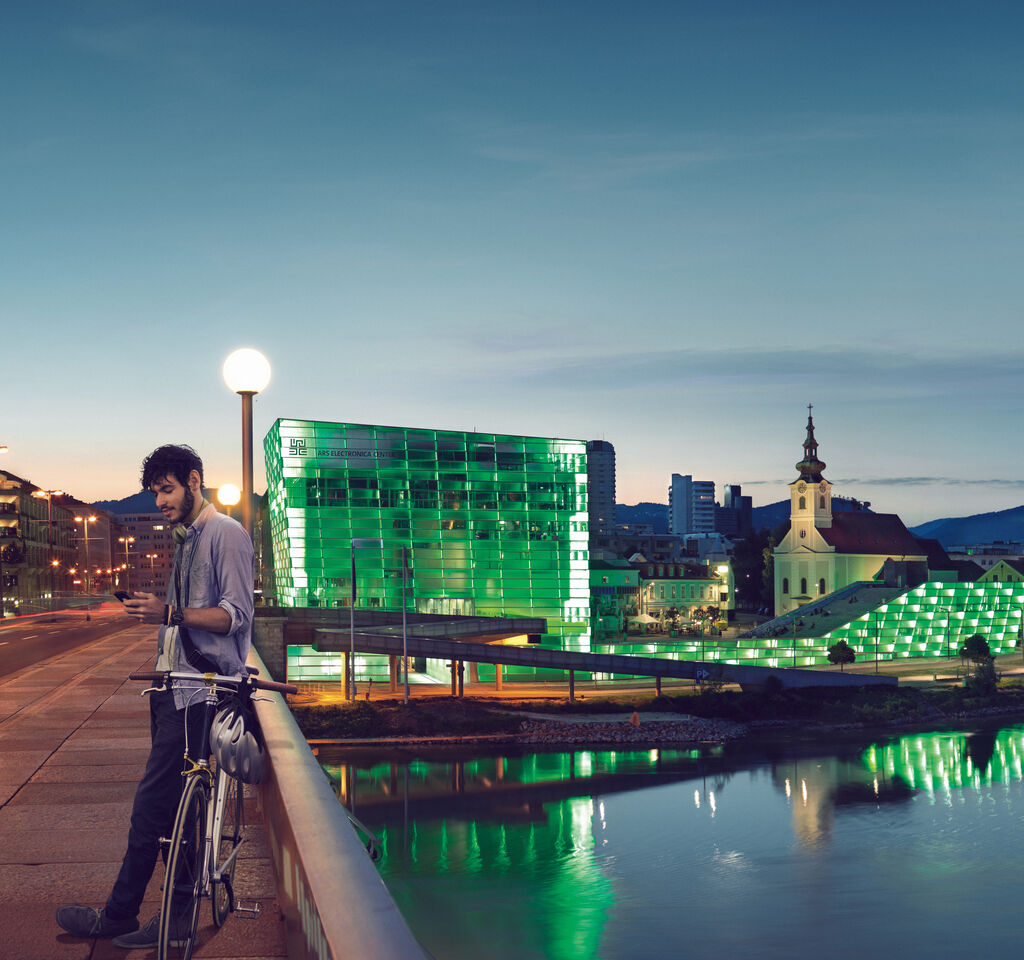 It’s no secret that Austria boasts a long history of cultural and intellectual achievements. You’ll find it reflected in the country’s tremendous architectural landscape. Attention-getters are everywhere, and discovering them is as simple as going for a stroll. Whether in the urban centers of Vienna and Salzburg or sprinkled across the idyllic countryside, magnificent castles, cathedrals and palaces bring the past to life and communicate with the present. Essential to Austria’s contemporary design is a deep respect for history and tradition: the old is often recast in the new. In fact, today’s Austrian architects have a talent for delivering imaginative designs that work provocatively within and alongside historical infrastructure.

Architecture enthusiasts have a new must-see landmark to add to their tour of Vienna: the University of Economics and Business campus. An enviable lineup of world-renowned architectural firms contributed to its smart design. Zaha Hadid’s open and airy library is a campus standout. Grouped around it are impressive student, faculty and administrative buildings by the likes of Estudio Carme Pinós, CRABstudio, NO.MAD Arquitectos, Atelier Hitoshi Abe, and BUSarchitektur. Covering an area of 12-plus football fields, nearly two-thirds of which are dedicated to public space, the entire site embraces a "Green Building" concept in which structure envelopes and facilities are designed to be as energy-efficient as possible.

The MuseumsQuartier (www.mqw.at), completed in 2001, splendidly juxtaposes contemporary art and architecture with Baroque-era Imperial stables. Designed by the Austrian firm Ortner and Ortner, the ambitious arts complex features an expansive courtyard anchored by the slate-gray MUMOK (Museum of Modern Art) and the colossal white box of the Leopold Museum. Viennese and visitors alike are drawn through passageways of the stately old stables into the vibrant MuseumsQuartier—where they’re rewarded with an art-centric space that reveres the old and celebrates the new.

Pritzker Prize-winning architect Jean Nouvel endowed Vienna’s 21st district with Mediterranean charm in his distinctive 1998 apartment complex. His most outstanding project, however, is the creative repurposing of one of four former gas towers in Simmering. Rather than completely rebuild the interior of Gasometer A, Nouvel used glass and steel—including a glass roof—to design airy living spaces that fit the contour of the tower’s curved exterior walls. In 2010, the Sofitel on the Danube Canal became Nouvel's latest masterpiece in Vienna. Dubbed Nouvel Tower, the minimalist 18-floor structure boasts colorful video ceilings and walls of glass that overlook the historic city center.

In the late 1890s, Vienna's metropolitan railwaysystem was designed by the great Austrian architect Otto Wagner, perhaps the country's first true genius of the modern age. Wagner's stations are still in use as the above-ground stops for the U6 subway line. Down below, the curved vaults supporting the tracks have been turned into trendy nightclubs with names like Chelsea, B72, All In, Shiraz, and Q [kju:].

Vienna's Ringstrasse is a magnificent boulevard edged by monumental buildings that count among the most important sights in the capital city. Emperor Franz Joseph announced the building of the Ringstrasse in 1857, triggering a flurry of new construction among Vienna’s elite. Today, many of their palaces can still be admired (most from the outside only). The Ringstrasse style, a type of Historicism, is marked by the imitation of numerous architectural forms of previous epochs. A rich diversity of styles can be seen in the most noteworthy edifices along the 5.3-kilometer (3.3-mi) stretch: the Vienna State Opera (Neo-Renaissance), Parliament, City Hall (Flemish Gothic), the Burgtheater (New Baroque), the university (Neo-Renaissance), Museum for Applied Art, Vienna Stock Exchange, and the Votive Church (New Gothic). Especially worth seeing are the Museum of Fine Arts and the Natural History Museum, both architectural masterpieces in the Neo-Renaissance style.

In recent years, outstanding contemporary architecture has given Salzburg a modern accent. Particularly intriguing is the new Museum of Modern Art on Mönchsberg (www.museumdermoderne.at), which overlooks the narrow, winding streets of Salzburg’s historic center from its mountaintop perch. On the outskirts of town, the elliptical glass and steel Hangar-7 (www.hangar-7.com) provides a seemingly aerodynamic shelter for Red Bull founder Dietrich Mateschitz’s impressive airplane collection.

Historic Salzburg is a city for strolling, and among the many charms of this UNESCO World Heritage Site are the medieval Durchhäuser. The old passageways are picturesque shortcuts through buildings that open up to such landmarks as the Salzburger Dom and the splendid Domplatz, where annual performances of Hugo von Hofmannsthal’s "Everyman" are held during the internationally acclaimed Salzburg Festival.

In the country’s westernmost province, a veritable Alpine laboratory of new design and construction has emerged. Contemporary building styles here embrace sustainable use of resources and a respect for local traditions. The recent successes of the Holzbauarchitektur (wood architecture) group blend the clean lines of modernist architecture with the use of local natural materials, especially larch. Vorarlberg’s contemporary timber architecture reflects even more modern influences that combine wood with expansive glass surfaces, as seen in the Firehouse & Cultural Center in Hittisau and the Juppenwerkstatt in Riefensberg. This workshop for traditional dress, located in an old barn, has been given an architectural facelift: the facade is now covered in glass, revealing the barn’s massive wooden beams behind it. The innovative glass-and-steel Kunsthaus Bregenz (www.kunsthaus-bregenz.at), designed by Peter Zumthor, channels natural light into its galleries from nearby Lake Constance.

Famous for its hospitality, Tirol’s many exciting new buildings were designed with visitors in mind. The Bergisel Ski Jump (www.arcspace.com/architects/hadid/Bergisel/) and the new Hungerburgbahn mountain railway in Innsbruck, both by Zaha Hadid, reflect this new trend in architecture. The Ötztal’s Aquadome (www.aqua-dome.at), one of Tirol’s premiere spas, blends concrete and colorful light for a dazzling nocturnal display. Even the MPreis supermarket chain (www.mpreis.com) has won numerous architectural awards for innovative design.

The new Festspielhaus in Erl, which boasts the world’s largest orchestra pit, performs an architectural display in perfect harmony with its magnificent alpine setting. In summer when performances are held next door in the white Passionsspielhaus, the black façade of the Festspielhaus blends in with the dark mountainside forest—effectively receding into the background. Come winter, however, the snowy white landscape compels the dark Festspielhaus to take center stage, where its angular design becomes the focal point.

Every year, droves of visitors come to this region. One draw is the world famous Gothic and Baroque Basilica in Mariazell, Austria’s most popular place of pilgrimage. Another is Styria’s imposing Benedictine Admont Abbey, home to the world’s largest monastery library.

Graz boasts the largest medieval city center in Europe, and a stroll down its meandering lanes past fanciful houses is a journey through building history. Architecture here is an inspiring study in contrasts. Many visitors are taken aback at their first glimpse of the bold, blue, shimmering Kunsthaus Graz perched among the medieval buildings. Mur Island, designed by New York artist Vito Acconci, is a half-opened shell in the middle of the Mur River, while MUMUTH – the House for Music and Music Drama – is wrapped in a monochrome metal web. In the Botanical Garden, Volker Giencke’s modern hothouses form a bizarre contrast to the elegant villas of the surrounding residential neighborhood. Visitors interested in art would do well to extend their stay in Graz by a few days to experience all the fascinating museums and galleries the new Joanneum Quarter has to offer. Particularly eye-catching is Eggenberg Castle, a true gem of Baroque architecture enhanced by iridescent peacocks strolling the grounds.

The juxtaposition of old and new is particularly striking in Krems, a city that is the domain of off-beat artists. The newly rebuilt Krems-Stein Danube Ship Terminal, traditionally known as the ”gateway to the Wachau,” takes the form of an oversized metal gate. In an area rich with historic buildings, a nineteenth-century tobacco processing factory is now home to the Kunsthalle, a major venue for contemporary art; its next-door neighbor is the modern Caricature Museum. The Steinertor serves as the entrance to the oldest section of the city, where standouts include the Dominican Church and Gozzoburg castle on the Hoher Markt, Lower Austria’s most important medieval urban building.

Nearby in St. Pölten, the provincial capital since 1986, a new ultramodern government quarter and adjoining cultural district have redefined the city. The Provincial Museum appears playful, with its wavy glass roof above the main entrance. The Festspielhaus is an unconventional glass complex and the architectural antithesis to St. Pölten Cathedral, a Baroque landmark in the historic city center.

In Langenlois, bucolic landscape and contemporary architecture converge for an extraordinary wine experience at the Loisium. The wine museum, designed by US architect Steven Holl, is an extravagant structure firmly rooted in a centuries-old wine growing area. Only a few miles away in Grafenegg, known for its open-air music festivals, the imposing “Cloud Tower” outdoor stage has, since 2007, attracted music lovers and those with a fondness for unusual architecture.

The provincial capital, Linz, has undergone a fundamental image change in recent years, due in large part to the city’s many new architectural projects. Once a place where fusing steel was the primary occupation, Linz today fuses together art, science and technology to create a buzzworthy design destination. Contemporary buildings like the Lentos Museum of Modern Art, the Ars Electronica Center for Art, Technology and Society, the Brucknerhaus, and the new Music Theater (still under construction) stand in dynamic counterpoint to the historic city center’s medieval Mariendom cathedral and a romantic pedestrian zone lined with charming shops. This vibrant city lends the entire region a creative energy, while honoring its cultural roots.