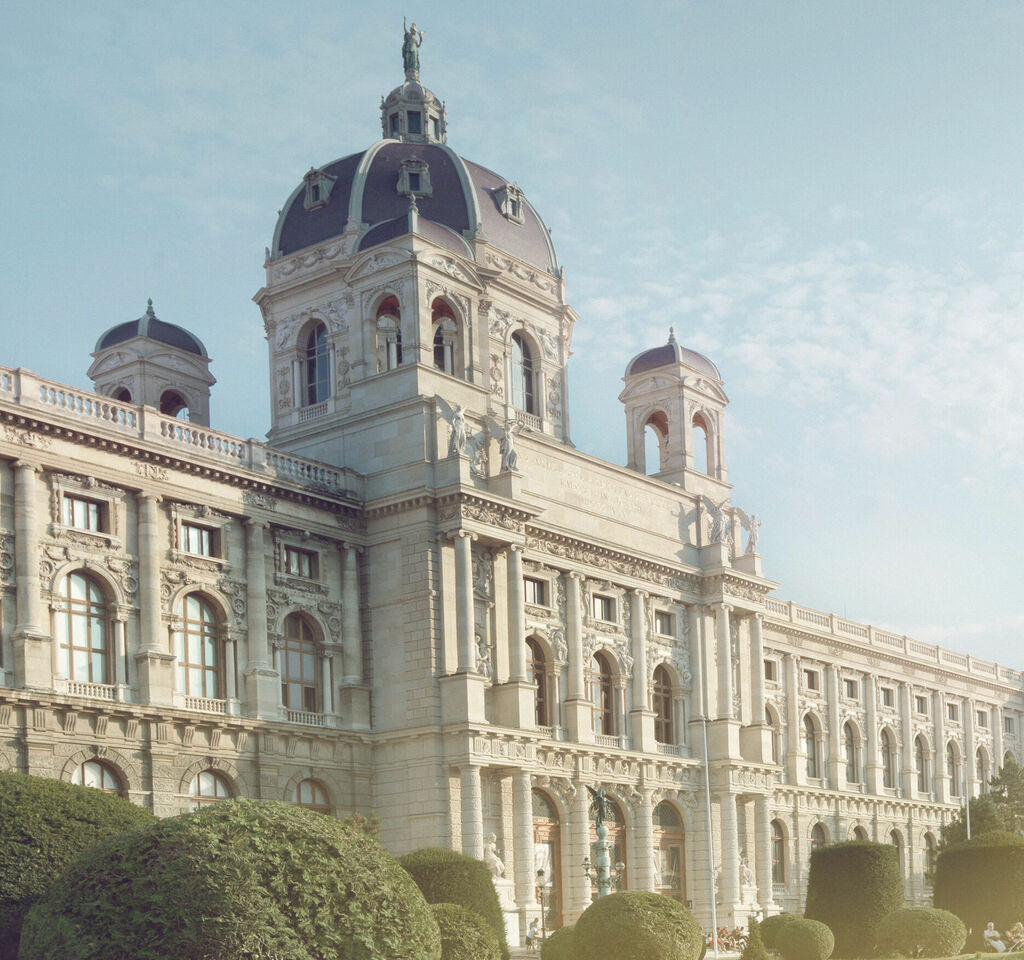 Like a golden thread, art reveals the vibrant tapestry of Austrian culture. In every province across the country, you’ll find world-class museums and galleries, a thriving art scene and celebrated artists.

Vienna alone will impress the most demanding art lover with the richness and variety of its museums. And with the European Union opening to the East, Austria is at the heart of international exchange—its art and design world pulsing with fresh, creative energy.

Perhaps the best way to appreciate Austria’s artistic wealth is to view it from three essential perspectives: the Habsburg Empire’s glorious collection of European Renaissance art; the revolutionary movements of the late 19th and early 20th centuries; and exciting developments in contemporary art and design.

From the 1500s to the birth of modernism, the Habsburg family commissioned and collected some of the world's most splendid paintings, sculptures and decorative arts. Striking mythological canvases and court portraits by Correggio, Tintoretto and Velázquez as well as masterworks by Caravaggio and Rubens found their greatest patrons in this imperial dynasty.

To stroll through the Museum of Fine Arts (KHM, www.khm.at ) is to behold the painterly genius of Renaissance Italy, Holland, Germany and Spain. Opened in 1891 to unite and properly present the Habsburg’s vast treasures, the museum spans Ancient Egyptian, Greek and Roman antiquities to medieval art and the splendid Baroque. It boasts the world’s most comprehensive collection of paintings by Pieter Bruegel the elder. In all, the museum is divided into eight collections, some of which are housed in the Hofburg and in Schönbrunn Palace.

The largest of the Habsburg residential palaces is home to the Albertina (www.albertina.at). Arguably the finest collection of graphic art in the world ranges from French Impressionism and German Expressionism to the Russian avant-garde up to the present. Michelangelo and da Vinci share space with Dürer, Rubens and Rembrandt, and modern masters from Klimt to Picasso—and that’s just a mere fraction of the impressive names among the one million-plus prints and 60,000 drawings in the Albertina’s gilded staterooms.

Built by Prince Eugene of Savoy (1663-1736) as his summer residence, the beautiful Belvedere is actually two palaces connected by a stunning baroque garden. The world's largest Klimt collection stars in the Upper Belvedere, where art from the Middle Ages to the present day includes Schiele and Kokoschka masterpieces next to works of French Impressionism and the Vienna Biedermeier era. The Lower Belvedere features temporary exhibitions, while the palace stables are home to some 150 objects of sacred medieval art. In 2013, the prince’s Winter Palace opened as a fourth showcase for the Belvedere collections and contemporary works.

On its magnificent perch overlooking Innsbruck, Ambras Palace features a Gallery of Arts and Wunderkammer, an armory and Hall of Antiquities. Built by Archduke Ferdinand II (1529-1595), a standout among Habsburg collectors, the Renaissance palace is home to the Habsburg portrait gallery, representing Albrecht III (1349-1395) to Emperor Franz I (1768-1835). More than 200 works by old masters include Titian, Lukas Cranach and Diego Velásquez. The centerpiece of late-medieval works is the Georg Altar of Emperor Maximilian I.

The end of the nineteenth century saw the dawn of a new epoch in art, literature and thinking. In Vienna, a prominent group of revolutionary artists and architects rebelled against Historicism and embraced the burgeoning Jugendstil (Art Nouveau) movement. They called themselves the Secession.

Gustav Klimt, Josef Hoffman and Koloman Moser were among the founding members of the Secession. Their aim: to regenerate the arts in Vienna. They produced some of the most provocative and brilliant art of the Wiener Moderne, radically investigating sexuality and the psyche in their work. The undisputed icon of the entire movement is Klimt’s world-famous "The Kiss," which today takes center stage in the Upper Belvedere.

One of the most famous examples of Viennese Jugendstil is the Secession building, completed in 1898 by architect Joseph Olbrich. It served as the first exhibition hall in Central Europe dedicated exclusively to modern art. Josef Hoffman designed installation spaces for the exhibitions and, with Kolo Moser, designed and produced the group’s Ver Sacrum journal. Both went on to form the Wiener Werkstätte, a consortium of designers and skilled artisans committed to the ideal of the Gesamtkunstwerk (total work of art), in which architecture, painting, sculpture and decorative arts are integrated into a more enriching whole.

Though a peripheral member of the Secession, Otto Wagner was a seminal figure in Vienna’s art world throughout the period. He shaped the Austrian capital more than any other Secession architect. Among his most famous designs are the Stadtbahn (urban railway), the Majolikahaus and Musenhaus, Europe's first modernist church (St. Leopold am Steinhof) and the Postsparkasse Savings Bank.

The Kunstschau exhibtions of 1908 and 1909 marked a shift away from the decorative art of the Secession toward the Expressionism seen in works by Egon Schiele and Oskar Kokoschka. At the same time, architect Adolf Loos, an acerbic critic of ornamentation, favored purely functional architecture made with high-quality materials. His Loos House on Michaelerplatz, completed in 1912, alienated contemporary Viennese, because the so-called "house without eyebrows" lacked the customary small roofs over its windows. Today, it is regarded as one of the most important structures of the Wiener Moderne.

The First World War and the collapse of the monarchy in 1918 brought about the end of Viennese Jugendstil. Fortunately, you can still encounter its splendor in buildings along the Ringstraße, at the Sisi and Sigmund Freud Museums and at the Belvedere.

Austria's deep commitment to new art is evident throughout the illustrious MuseumsQuartier (www.mqw.at). In stimulating counterpoint to the Museum of Fine Arts, the MQ (as the Viennese call it) is a forward-looking arts complex rising from centuries-old Imperial Stables. The Leopold Museum and the MUMOK are stunning showcases for Austrian modernist art and international postwar art, respectively. Workshops, smaller galleries, and a complete architecture and design center connect Austria's formidable artistic traditions to today’s emerging artists. An inviting, spacious central courtyard hosts thought-provoking public projects, which can be enjoyed from the charming restaurants and cafes that draw all of Vienna to the MQ.

Founded in 2007, the annual VIENNA DESIGN WEEK (www.viennadesignweek.at) turns the spotlight on design each autumn. Spanning footwear to furniture, industrial to experimental, designers from all over Austria and the world share their latest works in presentations, exhibitions, unique happenings and performances throughout the city. At the heart of the festival, several Passionswege feature playful collaborations between designers and traditional Viennese businesses.

Vienna’s Museum of Applied Arts (MAK; www.mak.at) is highly regarded as a repository of Biedermeier (1815-1848) and modernist design, with impressive holdings that go back many centuries. But that’s only part of the story. The MAK also focuses firmly on the present through its ongoing affiliation with the University of Applied Arts.

In Salzburg, the astounding Museum der Moderne (www.museumdermoderne.at) hosts large-scale installations and rotating exhibitions of contemporary art. From its idyllic Mönchsberg ridge, visitors can enjoy spectacular views over the city as well as in the minimalist, well-lit exhibition spaces and photography gallery. Exhibitions have focused on such notables as Pablo Picasso, Arnulf Rainer, Georg Baselitz, William Kentridge, and Nancy Spero.

Since 2011, Graz has been a UNESCO City of Design—a global network that unites creative professionals to generate new ideas and incorporate design into everyday life. During Designmonth Graz, more than 50 national and international designers converge on the dynamic JoanneumsQuartier Graz to exchange ideas and share design concepts. Year-round the Joanneum Quarter offers a lively mix of art and culture with the Neue Galerie Graz, the Multimedia Collections, and several esteemed museums.

The Lentos Museum (www.lentos.at/en/), a glass modernist standout on the banks of the Danube, provides Linz with a contemporary museum of truly international stature. Its collection spans the early 19th century to the present day with painting, sculpture and installations, as well an impressive photography collection documenting the development of art photography. The museum has a vigorous acquisitions policy.

Designed by Pritzker Prize-winning architect Peter Zumthor, the Kunsthaus in Bregenz (www.kunsthaus-bregenz.at) incorporates an unoccupied floor between each gallery level to provide natural light to exhibitions without the use of electrical fixtures or windows. The KUB, as it’s known, has featured renowned contemporary artists from Olafur Eliasson, Jeff Koons and Richard Serra to Jenny Holzer, Cindy Sherman and Anish Kapoor. Its series of publications and extensive educational program illuminate trends in contemporary art.