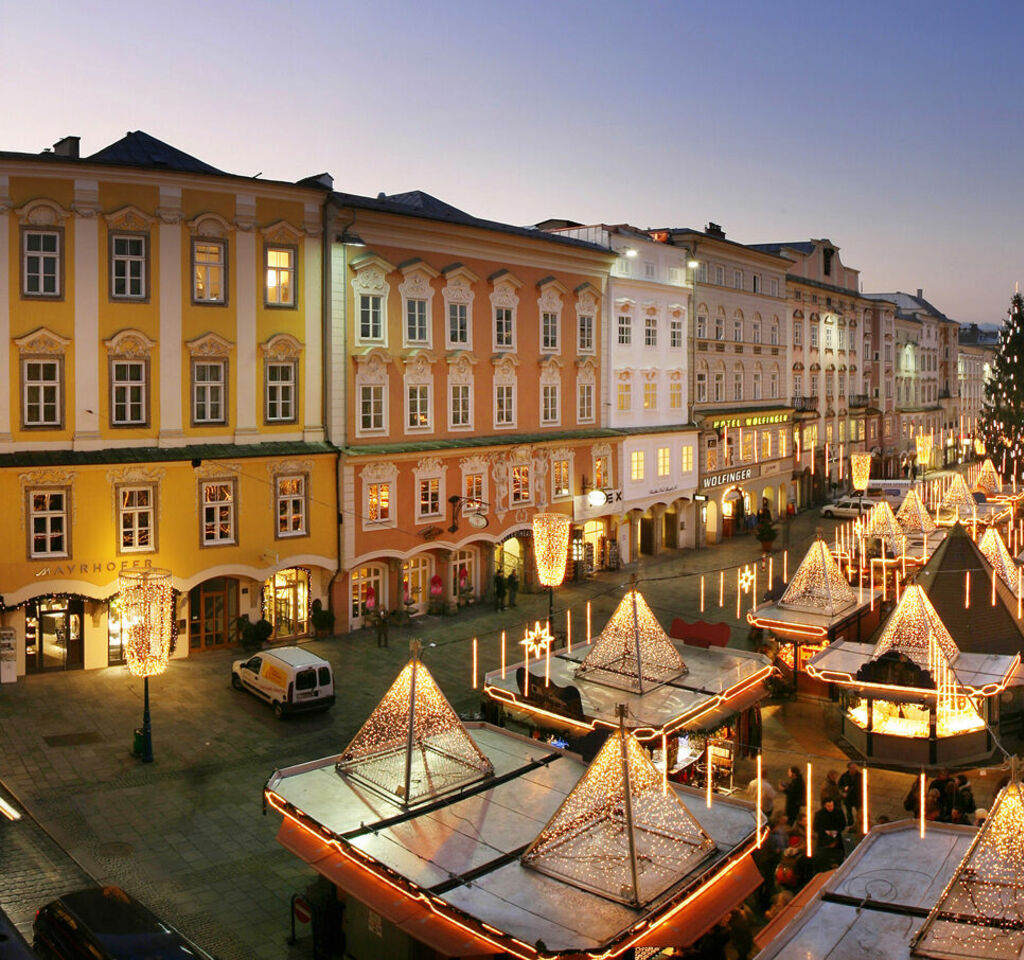 Austrians love to throw a festival, a parade, anything to have a ball—there’s even a season for balls! Every month of the year is rich with wonderful cultural events. Extraordinary concerts and arts festivals take world-class to a new stage, whether floating on a picturesque lake or ringing out from the mountaintop. From Christmas magic to flower-adorned cow parades, mouth-watering culinary arts to cutting-edge technology, Austria celebrates year-round. Come, join the fun! This is only a taste of all there is to see and do.

Advent (Austria), the four weeks leading up to Christmas Eve. Austria shines during this season of anticipation, when Advent calendars count the days ‘til Christmas Eve and Advent wreaths are lit each Sunday. This festive time of year is filled with caroling and Christmas cookies and joyful celebrations.

Christkindlmarkt (Vienna/all of Austria), starts late November. For centuries, these charming markets have rung in the spirit of Christmas all over Austria. Festive outdoor stands gathered before town halls and imperial palaces are strung with lights and evergreens to showcase handmade decorations, seasonal delicacies and unique crafts. Many come to socialize and shop for special gifts, while warming up with punch or Glühwein. The most impressive Christkindlmarkts are at Vienna’s City Hall, Schönbrunn, and Spittelberg. www.austria.info

Krampus (Tirol and Salzburg Land), December 5. Throughout western Austria, this pre-Christian festival celebrates a horned, demonic companion of St. Nicholas. Krampus is said to scare children into being nice instead of naughty.

Christmas (Austria). This much beloved holiday is celebrated on December 24 in Austria. Once the presents are wrapped and the cookies are baked, families gather for an evening of feasting and exchanging gifts. The "Christkind" (a sort of Christmas angel) carries out the duties of Santa Claus, not only bringing the gifts but decorating the entire Christmas tree.

New Year's Eve/Silvester (Vienna), December 31 - In Vienna, the famous "Silversterpfad" is a long wintry path filled with revelers that winds through the city streets to St. Stephen's Cathedral. Along the way, crowds enjoy free waltz lessons in front of City Hall—and continue the celebration long into the night with even more waltzing in the streets. Throughout Austria, many people set off fireworks just after midnight. www.vienna.info

New Year’s Concert(Vienna), January 1. The Vienna Philharmonic performs a selection of lively yet profound masterworks from the Strausses and their contemporaries. Broadcast from the Musikverein’s magnificent Golden Hall, this musical New Year’s greeting goes out to more than 90 countries and an estimated 50-million television viewers around the world. http://www.wienerphilharmoniker.at/new-years-concert/new-years-concert-main

Perchtenlauf, St. Johann and other places (Salzburg), January 6. A month after Krampus, these lively processions celebrate the scary companions of St. Nicholas—this time with spectacular large wooden masks that villagers have spent the year creating. www.perchtenlauf.at

Hahnenkamm World Cup Ski Race, Kitzbühel (Tirol), mid-January. It’s no secret that Austria is legendary for skiing, and this is one of the top races on the World Cup ski circuit. www.hahnenkammnews.com

Ice Dream/Eistraum, City Hall (Vienna), starts late January. For several weeks from late January to late March, the plaza in front of Vienna's colorfully illuminated City Hall is transformed into a huge ice rink for everyone to enjoy. www.vienna.info

Mardi Gras/Fasching (Austria), Tuesday before Ash Wednesday. Famous for its Fasching celebration, Villach puts on a major parade of "fools" and other amusing characters who play various parts in the procession. On Fasching Tuesday itself, many people throughout Austria wear colorful costumes as they go about their daily business.

Easter/Ostern, late March or April. Easter is a major holiday in Austria, second only to Christmas. Celebrations begin the night before with impressive bonfires, followed by colorful egg hunts on Easter Sunday. Many Austrians take Easter week off to travel or spend time with family.

Salzburg Easter Festival/Salzburger Osterfestspiele (Salzburg), late April. Founded in 1967 by the great conductor (and Salzburg native) Herbert von Karajan, this festival was initially intended as a showcase for opera and now presents classical and contemporary works as well. Christian Thielemann is the current director. www.osterfestspiele-salzburg.at/en

Vienna City Marathon (Vienna), late April. Starting at the impressive United Nations complex, runners go the distance past the best of Vienna, including Schönbrunn Palace, the Prater, and all the majestic landmarks along the Ring Boulevard. www.vienna-marathon.com

May Day/Erster Mai. Austria's equivalent to America's Labor Day, May 1 is also a traditional holiday celebrating spring. Many villages erect festive maypoles, commonly about 50-feet tall, and set up a little “guard” tent to ensure that no other village steals their maypole in the nights leading up to May Day!

Summer Night Concert/Sommernachtskonzert (Vienna), late May. The Schönbrunn Palace Gardens are the magnificent setting for this free, open-air performance by the Vienna Philharmonic. http://www.sommernachtskonzert.at/index_en.html

Life Ball (Vienna), late May. Promoting AIDS awareness since 1993, the Life Ball has become one of the top such events in the world. The joyous celebration and charity event features a major fashion show attended by many top designers and major celebrities. http://www.lifeball.org/index.php?lang=en

Pioneers Festival (Vienna), early June. Tech innovators from around the globe descend on the Hofburg Imperial Palace for two days of networking, brainstorming and inspiring speakers. Startups get to show off the next big thing to top executives and investors. https://pioneers.io/festival2017/

Vienna Jazz Festival/Jazz Fest Wien (Vienna), starts early June. Jazz is a major passion in Austria, and Vienna's annual festival is a magnet for the finest jazz musicians in the world. http://www.viennajazz.org/en

Styriarte Graz (Styria), starts late June. Founded by the great conductor Nikolaus Harnoncourt, who was raised in Graz, this festival is dedicated each year to a single composer. http://styriarte.com/en/

Tyrol Festival Erl (Tirol), July and late December. This intimate music and opera festival, presented twice a year in an alpine hamlet, has become an insider’s secret among classical music lovers from around the world. http://www.austria.info/us/austria-a-singular-journey-a-lifetime-of/tirol-innsbruck/tyrol-festival-erl

Rainbow Parade/Regenbogenparade (Vienna), early to mid-July. Gay pride on a grand scale, this popular procession celebrates life with humor and nonconformity by circling the Ring Boulevard against the normal flow of traffic. http://www.whatsonwhen.com/sisp/index.htm?fx=event&event_id=31693

Bregenz Festival (Vorarlberg), starts late July. This top musical event is known worldwide for its dazzling operas set on the famous floating stage at the edge of Lake Constance. www.bregenzerfestspiele.com

Ars Electronica, Linz (Upper Austria), early September. In a sleek, sculptural building on the banks of the Danube, the world's most important technological festival explores innovations and intersections between technology and art. http://www.aec.at/index_en.php

International Haydn Days/Internationale Haydntage (Burgenland), mid-September. A native of Burgenland, Haydn spent much of his life at the Esterházy Palace in Eisenstadt, which today hosts this music-lovers’ festival dedicated to the composer’s vast repertoire of symphonies, chamber music, operas, piano sonatas, masses and concertos. http://www.haydnfestival.at/haydn_en/

Festlicher Almabtrieb, late September. In Austria, cows get to spend their summers grazing high up in beautiful alpine pastures. When farmers bring them back to their stables in early autumn, many towns and villages celebrate with festivals and parades honoring the elaborately decorated herds.

Ball Season (Vienna), starts mid-November. The legendary ball season kicks off in mid-November with the Vienna Red Cross Ball, then shifts into high gear with the Hofburg’s Imperial Ball on New Year’s Eve. Until the start of Lent, thousands of elegantly clad guests attend hundreds of formal galas—including the Coffeehouse Owners’, Confectioners’, and Florists’ Balls. The belle of them all is the Opera Ball in the Vienna Opera House. [ED. NOTE: Needs updated link] www.wiener-staatsoper.at/Content.Node/home/opernball/Allgemein.en.php